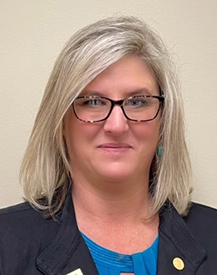 Position on Board: RN in Clinical Practice

Janie Clanton began her medical career after receiving her Paramedic License in 2007 upon completion of the Paramedic Program at the University of Mississippi Medical Center. Janie worked for Copiah County EMS until graduating from the AND program at Copiah Lincoln Community College.

Her nursing journey began at Hardy Wilson Memorial Hospital. After working in the ER for a few years she accepted a flight nurse position with Air Methods Life Flight in Brookhaven, MS. Janie continued her flight nurse by moving to Med Trans and opening an air medical base in Magee, MS.

Governor Haley Barbour and later Governor Phil Bryant appointed Janie to the EMS Advisory Council for the State of Mississippi. This year, Governor Tate Reeves appointed her to Mississippi Board of Nursing.

Janie is married to David, they have 5 children and 3 grandchildren and reside in Meadville, MS.